I admit that I don’t closely follow basketball or sports in general but you had to be living on another planet not to hear about the recent feats of New York Knicks point guard Jeremy Lin. Lin literally went from a bench-warming third-string point guard to household name and international star in a matter of weeks.

The overnight success of an unknown and initially undervalued NBA player is an incredible “Cinderella” story but it raises questions for both managers and employees alike. What every manager must ask himself or herself is “do you recognize the “Jeremy Lin’s” in your workplace?” And the question employees must ask is, “are you a third string bench warmer or are you able to make a difference for your organization?”

Jeremy Lin’s story is one of specific lessons that both managers and employees can takeaway and relates to the lack of recognition employees don’t receive. From what I’ve learned, Lin didn’t receive any academic basketball scholarship and didn’t decide to play b-ball because some scout recognized a unique talent.

Like the majority of employees, Jeremy Lin’s abilities remained unrecognized and often ignored even though he worked hard to perform well. Team after team overlooked Jeremy’s abilities placing him on “waivers” twice before the Knicks considered “hiring” him as only a backup point guard. Within an organization, being on “waiver” is equivalent to not providing an employee with direction or worse, laying them off for no reason. As in Jeremy’s case, eventually an NBA team, or your competitors, discover how to hire and harness the value of your casted off employees.

Let’s look at the underlying lessons an employee can take away from Lin’s experience.

Have clear personal and professional goals:

Jeremy Lin is more than an overnight story. His professional goal was to become a pro basketball player and knew what he needed to do to get to the NBA and survive. Personally, his goals, in the event the NBA route didn’t work out, was to seek a quality education (he’s a Harvard grad) and found other interest that would support him should basketball not work out.

Focus on what you do well; then do it better:

Like Lin, you may never know when the opportunity to prove yourself will arise. From high school through to his college basketball efforts, talent scouts didn’t notice Jeremy. Even when in the NBA (as a benchwarmer) he was cut by two teams before the Knicks offered him a one-year backup point guard contract. Jeremy recognized to learn through failure. Determination, patience, consistency, and focus provided the fuel for him to capitalize when the opportunity presented itself…and he did it whether people were watching or not. Do the same.

Lin practiced every aspect of the game. As an aspiring professional athlete he studied how others played and how the game is played. His philosophy to continually improve is not just for his current role but also for any role presented. You must “stay fresh”…this means don’t rest on what you know but to discover what you don’t know. Push yourself to learn more about your role, your organization, and your industry. Then take what you’ve gained and find how it can be used to add value. Lin realized that he had to demonstrate his value before any team would reward him. The workplace is the same. You have to demonstrate what you’re worth and can contribute to gain the attention of others.

Now, what are the underlying lessons that managers can takeaway? In the words of Jack Welch, “Give your bench a chance!” I couldn’t agree more. Managers and NBA coaches have something in common…they play it safe and play what they know works. The Knicks coach didn’t put Lin in the game because it was a sure thing…he was stuck and had to throw in the backup guard. If he wasn’t in this position he would have played it safe and used his starting point guards and Lin would’ve remained in anonymity.

Managers reading this are probably screaming that the risks are too high. I argue that the risk of playing it safe is too high. It’s true, utilizing inexperience is not the wisest move but use your judgment. I am not asking to put someone in that can’t handle a situation. But if you aren’t comfortable doing so for any occasion then this is more reflective of poor employee management ability rather than ability of the employee themselves.

There is significant upside to offering the right opportunity to the right person at the right time. The Knicks believed that Lin had skills they required and will possibly develop over time. For Lin, his patience paid off and he proved his passion through results. If your hiring practices are solid then rest assured that your “bench” is ready for the “coach” to put them in the game. Your employees want to prove themselves and want to do well. So, your downside risk is smaller than you think and the upside much greater than you expect.

For Jeremy Lin, the story remains to be told. Like with all employees, some are ready when called upon, others may need more time and some may never answer the call. Those, like Lin, that impress quickly, must demonstrate they can sustain the momentum. But this is a two-way relationship. Employees, you need to heed the advice described here to gain attention and recognition. Managers, decide on the calculated opportunities you believe when your team can succeed. We know what Jeremy Lin can do but now the Knicks coaching team must support Lin’s efforts and growth if both are to succeed.

Ajay M. Pangarkar and Teresa Kirkwood are founders of CentralKnowledge.com and LearningSourceonline.com. He is a renowned performance management expert and 3-time author most recently publishing the leading performance book, The Trainer’s Balanced Scorecard. Contact:  ajayp@centralknowledge.com

Ajay is a leading workplace performance thought-leader, strategist, 3x author, and President of CentralKnowledge Inc. He is also an all-around great guy! 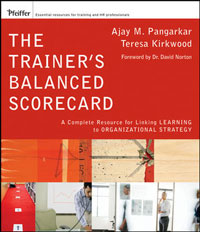 Get the book Training Professionals Want…